Mentioned as being a dwarven Paladin that resides in the city of Dalto Thum by Hermil Fesh, via a sending with James Quillus in Episode 26:Caravan. According to Fesh he is the only way into Skyscorcher. Homrian tells the party that Dondo is well respected among the dwarven people and is also against the war. In Episode 33:War at the Gates, Dondo is described as being a stout, older dwarf. He has shocks of white hair pulled into a pony tail, and a long white beard that is not braided. Dondo wears long pale robes, and around his neck is a symbol, a sort of ankh like shape that looks like a golden candle, it is identical to the one Chalmers has. Dondo makes a delicious mountain stew.

Dondo is a Paladin of the Candle Queen.

*He can cast cure wounds at 5th level. 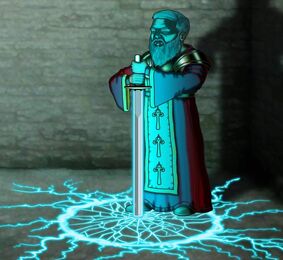 Retrieved from "https://thedungeonrun.fandom.com/wiki/Dondo_Karigina?oldid=3688"
Community content is available under CC-BY-SA unless otherwise noted.